Child Seats “Made in Oberfranken”

Child Seats “Made in Oberfranken” 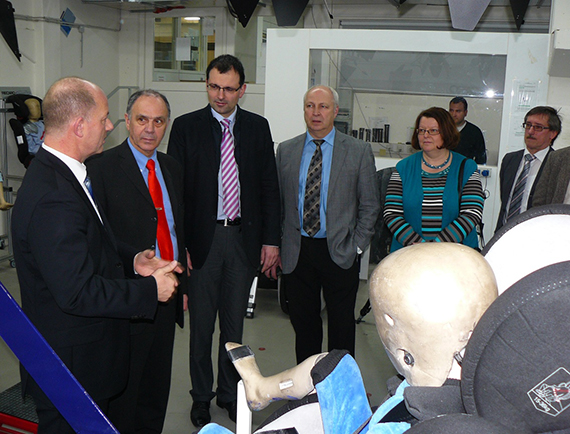 In the end of February Recaro Child Safety welcomed the member of the Bavarian parliament Martin Schöffel, the mayor of Marktleugast Franz Uome and other members of the municipal council at its headquarters in the Franconian Marktleugast. As one of the major employers in the region Recaro currently employs 220 people, who in 2014 produced more than 400,000 child seats.

In 2011 Recaro Child Safety became an independent operating subsidiary. Until then the company belonged to Recaro Automotive based in Kirchheim unter Teck. That year Recaro Child Safety also made Marktleugast its headquarters and with a team of 120 employees now focused on child safety products. However, the decision for the Franconian region was made way earlier. In 2004, Recaro Child Safety had already merged with the local traditional company Storchenmühle to combine the long-standing expertise of both companies and benefit from the existing infrastructure as well as the related potentials. This was a great success; in just the last three years, the company has seen an impressive growth in turnover.

Managing director Gerhard Kraus was able to present this success story to his guests at a factory tour. "Of course, as a father of two small children their safety is very important for me," confirms member of the Bavarian parliament Martin Schöffel. After getting a good look at the production of child seats for the different age groups, a live crash test in the in-house testing facilities was on the agenda. "It is quite impressive how stable the child seat stays in its position despite the massive impact," says Cornelia Buss, local councilor.

Recaro Child Safety is positive about the future; the course for further growth has been set. Both Mr. Schöffel and Mr. Uome promised the best possible support from the authorities.

RECARO Child Safety, located in Franconian Marktleugast with branches in four countries, is an independent operating subsidiary of the RECARO Group.

The RECARO Group also encompasses the division RECARO Aircraft Seating (aircraft seats) in Schwäbisch Hall as well as the RECARO Holding located in Stuttgart. The Group’s consolidated sales amounted to more than 382 million euros in 2013. Currently the Group employs more than 2,000 employees at its locations around the world.