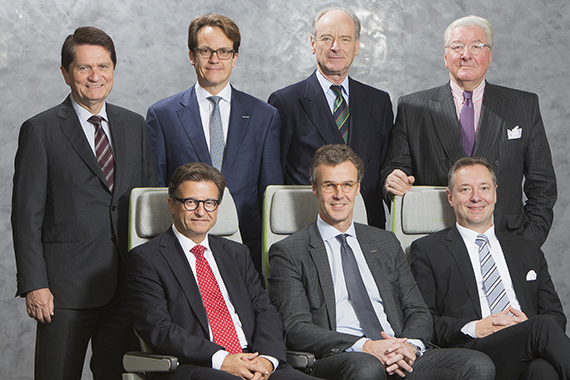 Stuttgart, Germany. The Advisory Board of Recaro Group has been supplemented with three new members, and will thus consist of seven individuals, effective January 1, 2015. Through this expansion, the committee, which provides consulting and supervisory support to the specialist in innovative seating solutions, has gained three highly experienced and knowledgeable members, each with successful entrepreneurial backgrounds.

The new members are Egon W. Behle, 59, Christian Körfgen, 49, and Dr. Andreas Seidl, 51. They will complement Chairman Dr. Rolf Bartke, 67, Prof. Dr. Hans-Jürgen Hellwig, 74, Dr. Jens-Jürgen Böckel, 71 and Prof. Bernd Wiedemann, 71, the Advisory Board’s longstanding members. According to company statutes, the Advisory Board of Recaro Group must consist of no fewer than four and no more than seven members. Their duties primarily include providing independent and professional advice to, and supervision of, the executive management of Recaro Holding, as well as the Recaro divisions Recaro Aicraft Seating and Recaro Child Safety. The competencies of the Advisory Board are similar to those of the Supervisory Board according to the German stock corporation law.

Egon W. Behle has served as a member of the board of directors of RUAG, a Swiss aerospace technology company, since 2011. From 2008 to 2013, he was Chairman of aircraft engine manufacturer MTU Aero Engines AG of Munich. Previously, the aerospace engineer’s career path included serving as Chief Executive Officer of ZF Lenksysteme GmbH of Friedrichshafen (2002-2007), after holding senior positions at Dornier GmbH and Renk AG.

Christian Körfgen has been Managing Director of Berlin-based NH Hotel Group Europe since April 1, 2014. From 1999 onward, he was with Deutsche Lufthansa AG, most recently as Vice President of Product Management and Innovation. In this role, he was responsible among other things for the airline’s aircraft interior designs, travelclass concepts and onboard services. His professional career began at Roland Berger Strategy Consultants in 1991.

Dr. Andreas Seidl has been a managing partner of internationally active Human Solutions Group of Kaiserslautern since 2002. Human Solutions devotes itself to providing innovative solutions in the fields of ergonomics, human modeling, body measurement and body scanning for the clothing, interior and mobility industries. Its customers include numerous renowned car manufacturers. Andreas Seidl studied electrical engineering and cybernetics in Graz and Munich and has published numerous scientific papers.

“I’m very pleased that we were able to have Egon W. Behle, Dr. Andreas Seidl and Christian Körfgen – three highly experienced and ideally suited individuals – join the Advisory Board of Recaro Group,” said Martin Putsch, Shareholder and Chief Executive Officer of Recaro Holding. “The new composition of this committee perfectly brings together all of the key competencies and skills that are required for Recaro Group’s current strategic direction. We are a modern, family-owned company with professional corporate governance. This claim is expressed, not least, by the professional expertise of the highprofile members of our Advisory Board.” Dr. Mark Hiller, Shareholder and Chief Executive Officer of Recaro Aircraft Seating, adds: “Our reconstituted Advisory Board has, among other things, a high level of aviation expertise. I'm sure that Recaro Aircraft Seating will benefit from their great wealth of experience.”

The Group’s consolidated sales amounted to more than 382 million euros in 2013. Currently the Group employs more than 2,000 employees at its locations around the world.